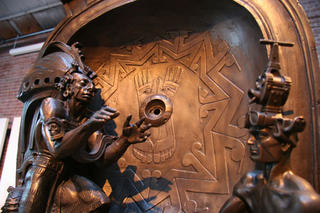 One of my absolute favorite artists of all time is Satnislav Szukalski. He was producing dramatic and innovative artwork for most of the 20th century.
Claiming to have no influences, his sculptures are just a hint of the immense talent this guy had. He did lavish study drawings of his sculptures-to-be. Sometimes these drawings would surpass the quality of the actual sculpture(which is difficult to believe). He had all sorts of theories on evolution as well as a whole in-depth personal study on tribal markings related to survivors of the great flood (antideluvian societies of south american region) Anyway - a gallery in San Francisco is having a show of his work.
(sadly most of his largest and most dramatic pieces were destroyed during the nazi's bombing of Poland,
as well as his nazi-confiscated artworks during the bombing of Dresden)

There are 3 books currently available through amazon that have some examples of his work.

Check out the gallery thats linked on this site.