This is a post that probably belongs on Diorama Getaway, but I want to keep that one reserved for my own work. I forget who originally turned me on to this but it has been haunting and inspiring me ever since that first viewing. Jake & Dinos Chapman, 2 artists that have experimented in many media collaborated on the building of this project. It is essentially depicting Hell. More specifically, what Hell is like for Nazi's. Their use of scale models and more traditional kits coupled with hand made horrific and imaginatively gruesome (dis)figures create a miniature nightmare of epic proportions.

Check the movie out here

While this tends to be a sensitive subject to many, the depiction of the 'payback' to the ones that committed those atrocities seems oddly justified. 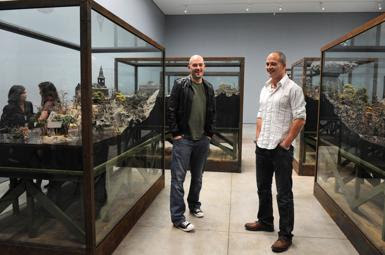 Here's some shots of the actual models/sets in 'touring' mode as it went into exhibition. Would have loved to seen these up close in person. 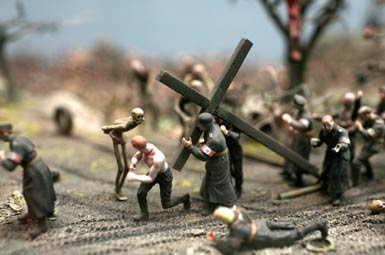 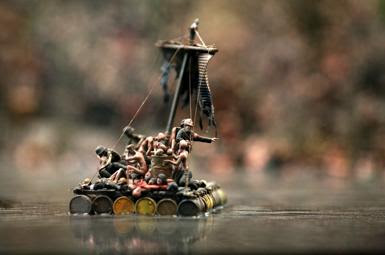 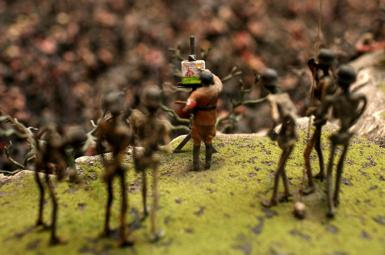 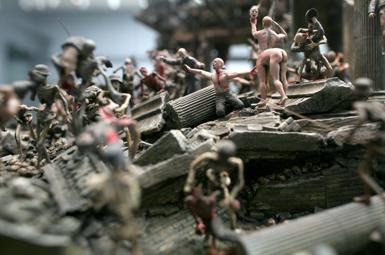 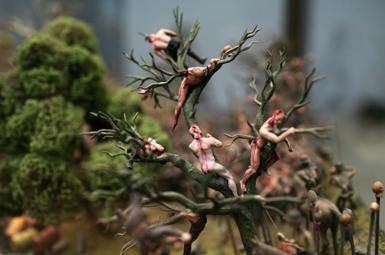 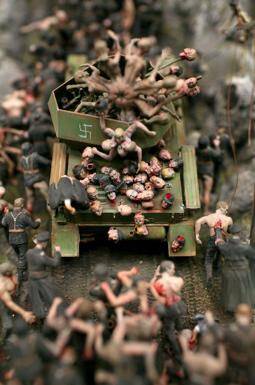 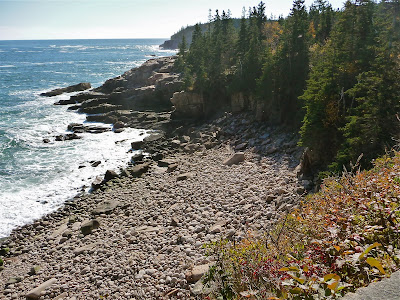 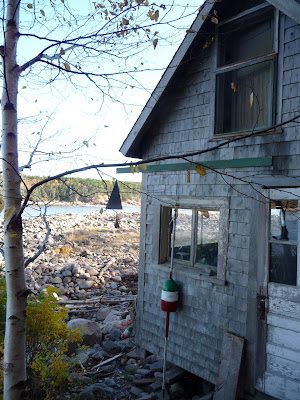 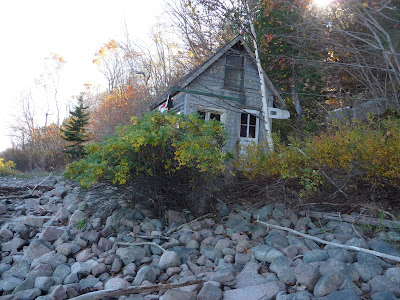 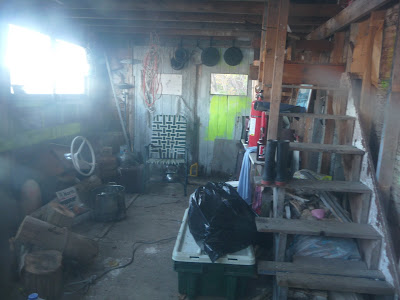 At this point, I was coming up with all sorts of back stories as to who might live here. Inside, I noticed a small fire stove with 3 fresh Duraflames. Also noticed a pretty crude food storage cooler and some sort of cookware on the ceiling. Most interesting was gazing up the rickety stairs, was what appeared to be a sleeping loft. Looked like squirrels had been living there the past 5 years. The great thing was, this places official resident was here yesterday in the rain. What a sweet deal, having your own private lil fishing shack smack dab in the heart of Acadia. Despite the overall salty conditions, it appears it still is all about Location. Location. Location.
Posted by @DJNoRequest at 12:19 PM 2 comments: 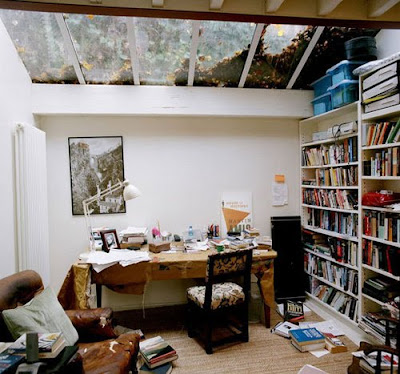 After a contest put on by @Beadinpath and @AWDawno on twitter, I was reminded of an article on Martin Amis, and his studio where he does most of his writing. I loved the quote in the Guardian article here where he mentions how it's away from his house, so he couldn't hear the children, and could smoke. I found it so dryly witty, I couldn't help but share. Martin is, for those who aren't familiar with his work, an author who has written some brilliantly horrific novels such as 'London Fields' and 'Dead Babies' Wiki entry here.
Posted by @DJNoRequest at 8:31 PM No comments: 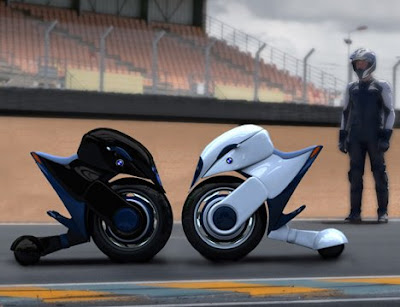 I love how BMW went and redesigned the whole concept of 2 wheel travel.
Looks incredibly dangerous by the look of the driver's exposure.
Still sure as hell looks like a fun way to commute to work.


FUTURE DUO WHEEL TRANSPORT
Posted by @DJNoRequest at 9:13 AM No comments: 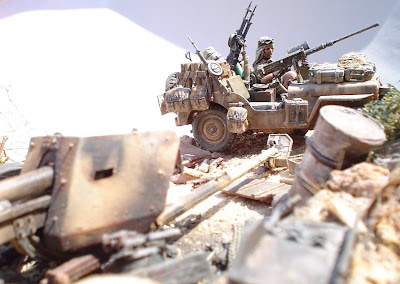 started a new blog that features some of my recent dioramas. Will be expanding to others as time goes by. Check it out at: www.dioramagetaway.blogspot.com
Posted by @DJNoRequest at 9:19 AM No comments:

H/T to several blogs
Posted by @DJNoRequest at 7:09 PM 1 comment: 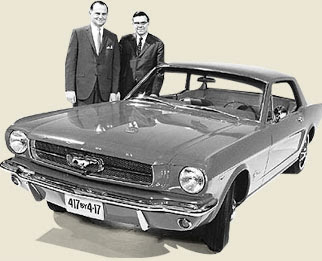 'Am I the only guy in this country who's fed up with what's happening?
Where the hell is our outrage? We should be screaming bloody murder.
We've got a gang of clueless bozos steering our ship of state right over a cliff,
we've got corporate gangsters stealing us blind, and we can't even clean up after
a hurricane much less build a hybrid car. But instead of getting mad,
everyone sits around and nods their heads when the politicians say,
'Stay the course'

Stay the course? You've got to be kidding.
This is America , not the damned 'Titanic'.
I'll give you a sound bite: 'Throw all the bums out!'

You might think I'm getting senile, that I've gone off my rocker, and maybe I have.
But someone has to speak up. I hardly recognize this country anymore.

The most famous business leaders are not the innovators but the guys in
handcuffs. While we're fiddling in Iraq , the Middle East is burning and
nobody seems to know what to do. And the press is waving 'pom-poms' instead
of asking hard questions. That's not the promise of the ' America ' my
parents and yours traveled across the ocean for. I've had enough.
How about you?

I'll go a step further. You can't call yourself a patriot if you're not
outraged. This is a fight I'm ready and willing to have. The Biggest 'C' is
Crisis! Leaders are made, not born. Leadership is forged in times of crisis.
It's easy to sit there with your feet up on the desk and talk theory.
Or send someone else's kids off to war when you've never seen a battlefield
yourself. It's another thing to lead when your world comes tumbling down.

On September 11, 2001, we needed a strong leader more than any other time in
our history. We needed a steady hand to guide us out of the ashes.

A Hell of a Mess. So here's where we stand. We're immersed in a bloody war
with no plan for winning and no plan for leaving. We're running the biggest
deficit in the history of the country. We're losing the manufacturing edge
to Asia , while our once-great companies are getting slaughtered by health
care costs. Gas prices are skyrocketing, and nobody in power has a coherent
energy policy. Our schools are in trouble. Our borders are like sieves.

The middle class is being squeezed every which way. These are times that cry
out for leadership. But when you look around, you've got to ask: 'Where have
all the leaders gone?' Where are the curious, creative communicators?
Where are the people of character, courage, conviction, omnipotence, and common
sense? I may be a sucker for alliteration, but I think you get the point.

Name me a leader who has a better idea for homeland security than making us
take off our shoes in airports and throw away our shampoo? We've spent
billions of dollars building a huge new bureaucracy, and all we know how to
do is react to things that have already happened.

Name me one leader who emerged from the crisis of Hurricane Katrina.
Congress has yet to spend a single day evaluating the response to the
hurricane, or demanding accountability for the decisions that were made in
the crucial hours after the storm.

Everyone's hunkering down, fingers crossed, hoping it doesn't happen again.
Now, that's just crazy. Storms happen. Deal with it. Make a plan.
Figure out what you're going to do the next time.

Name me an industry leader who is thinking creatively about how we can
restore our competitive edge in manufacturing. Who would have believed that
there could ever be a time when 'The Big Three' referred to Japanese car companies?
How did this happen, and more important,
what are we going to do about it?

Name me a government leader who can articulate a plan for paying down the
debt, or solving the energy crisis, or managing the health care problem.
The silence is deafening. But these are the crises that are eating away at our
country and milking the middle class dry.

I have news for the gang in Congress. We didn't elect you to sit on your
asses and do nothing and remain silent while our democracy is being hijacked
and our greatness is being replaced with mediocrity. What is everybody so
afraid of? That some bonehead on Fox News will call them a name?
Give me a break. Why don't you guys show some spine for a change?

Hey, I'm not trying to be the voice of gloom and doom here. I'm trying to
light a fire. I'm speaking out because I have hope, I believe in America .
In my lifetime I've had the privilege of living through some of America 's
greatest moments. I've also experienced some of our worst crises: the 'Great
Depression', 'World War II', the 'Korean War', the 'Kennedy Assassination',
the 'Vietnam War', the 1970s oil crisis, and the struggles of recent years
culminating with 9/11. If I've learned one thing, it's this: 'You don't get
anywhere by standing on the sidelines waiting for somebody else to take
action. Whether it's building a better car or building a better future for
our children, we all have a role to play. That's the challenge I'm raising
in this book. It's a call to 'Action' for people who, like me, believe in
America . It's not too late, but it's getting pretty close. So let's shake
off the crap and go to work. Let's tell 'em all we've had 'enough.'

Excerpted from 'Where Have All the Leaders Gone?'.
Copyright (c) 2007 by Lee Iacocca. All rights reserved
Posted by @DJNoRequest at 11:15 PM 1 comment: 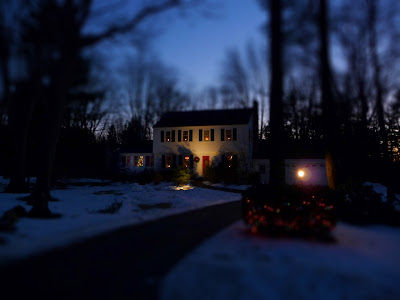 I'm obsessed at the moment.
Imagine, anything I want, I can turn into a diorama.
Even home at holiday time...
Sweet.

check it out at: