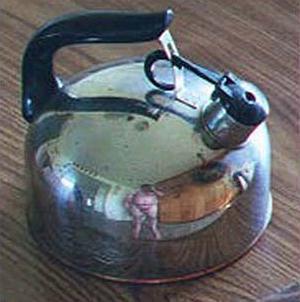 OK, I gotta admit - I never heard of this until I saw it on Snopes.
A pretty clever trend where people who are auctioning reflective items
sneak in a nude shot of themselves taking the pic in the reflection.
It's apparently already a trend - go figure.
Anyway, the image above is apparently the forerunner of this trend.
Check the other reflecto-pix courtesy of Snopes.com

i don't get it: it just makes you look all bloated & meaty like a stepped-on sausage or a none-too-fresh corpse.

There are plenty of examples of reflectoporn appearing on eBay - some fo the best are collected here!