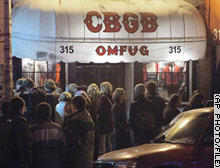 Looks like local L.E.S douchebag Muzzy Rosenblatt lost his case against CBGB's.
(trying to squander an extra 100,000 outta Hilly - hell, he could buy that whole building if he wanted to)
Fortunately Hilly can continue the tradition that he launched so long ago.
Sadly, however, it seems the quality of acts and price of beers has both declined and increased respectively.
Quoting the judge who decided the case - She cited the impact CB's had on the neighborhood "...the destitution, degradation and substance abuse were rampant when the club opened in 1973. CBGB has proven itself worthy of being recognized as a landmark -- a rare achievement for any commercial tenant in the ever diverse and competitive real estate market of New York City"

A Toast to a true NYC landmark.
Posted by @DJNoRequest at 11:50 AM