Country Time
The final unit in this building was also a ground level apartment. It was, in fact, the neighboring apartment to the beat down meth head diabetic's unit. Walking in here gave us the impression that this was going to be a relative piece of cake, as we could actually see a majority of the floor. There were big piles of items loaded up in the corners of each room as if they were intentionally left behind. Randomly scattered in each room were a couple lamps, the ubiquitous wood grained TV sets, Nail clippers, unopened cleaning supplies, lamps and a handful of cassettes - all country themed - hence the name of this post. I'm talking about actual good country music too, like Hank Williams, Waylon Jennings and Slim Whitman. The majority of the leave-behinds were essentially clothing comprised of well-worn hunting apparel, miscellaneous socks, and at least half a dozen hand-knit blankets. It felt a shame to dump these blankets as it was obvious someone spent a lot of time creating not just one, but five - all virtually identical. In the living room closet there was a blue electric utilities helmet, stained shirts on hangers and 2 hand cut walking sticks (one of which I helped myself to as it was a rock maple sapling)

The kitchen, with no imminent odor and quaint exposed brick walls, was bathed in darkness as there were no windows on this side of the building. Flashlights revealed that it was pretty clean compared to the other units we faced, but still held a wide collection leave-behinds such as glassware, coffee pots and other well worn appliances strewn about the counters and cabinets. In the closet with the walking sticks and helmet, I found one polaroid: 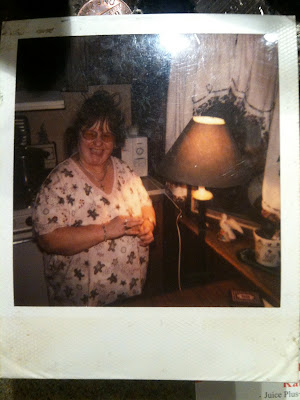 Upon closer inspection, we noted that everything in this photo had been, or was about to be loaded into the dumpster. (except the body) This photo was among the few souvenirs I brought back with me. Of the other keepers, was a beautifully eroded rock that appeared like a miniature replica of the cliffs in Monument Valley, as well as a perfectly usable military flashlight - complete with red and green lens covers.

As we loaded the remainder of the abandoned items into bags, it occurred to us, that out of every place we cleared, there wasn't one single book amongst all the detritus except for one dog-eared Danielle Steele novel found on the floor of this apartment. Fortunately there wasn't the same hopelessness here that was so prevalent in the others as the tenants likely just moved on in a somewhat orderly fashion. The building was now cleared of the remnants and crushed memories of the final 4 tenants to occupy the building. Overall, I have to say this was a solidly built and decently preserved building. (The bones of it anyway), With some hard work, and a crew fully outfitted in haz-mat suits, it could once again possibly be turned into warm and welcoming apartments.
Posted by @DJNoRequest at 10:35 AM