As we wind down the final apartments, I would like to pause and make clear, that aside from the desolation inside the building, I found Livermore Falls to be a rather quaint little town. It also appears that it is in the process of rebounding. There is a brand new hospital being built right down the street from where we were working at the nexus of Main St and the Exit off Route 4. I think this hospital is going to be key in revitalizing a town that has lost most of its livelihood since the closing of the local mills. The hospital will generate more traffic and with it businesses catering to it. This will also be a much more convenient medical facility than Franklin Memorial Hospital 20 minutes North. Aside from this stirring of growth, there are also some very creative elements to this town - something I notice throughout the whole of Maine overall. One business, which is currently for sale by the way, may potentially have the best name I have ever seen for a business. 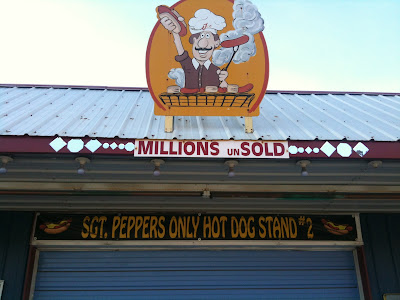 I do think the owner tried to squeeze one too too many jokes in with the #2 and the "unSOLD' bit, but that's subjective. Anyway, after a much needed lunch and hydration, we moved on to the next unit:

Apartment #2 Meth Head Diabetics
This was a ground floor level apartment, and one most likely to have been broken into and used as a party pad by the local kids. Fortunately for the owner, the doors and windows were all locked and intact. When we we walked in, on first glance, it did in fact appear to be a party pad. Upon closer inspection though, another story unfolded. We broke out the shovels and began piling the huge mess into the middle of the room so it could be more easily loaded into contractor bags. The discard pile consisted of a couple tires, some very large dog bowls, a couple TV's and yet another closet piled high with cat litter. In the kitchen, we once again found the obligatory nail clippers, jars of peanut butter and unused cleaning supplies. Scattered all over the floor was broken glass, shattered fluorescent tubes, a couple automotive parts, cheap cutlery, broken chair pieces and empty food containers. It appeared that the people who previously occupied this unit had actually taken the time to remove everything of value. Miraculously, there was no rotting food in the sink or fridge (Likely the large dogs had made short work of anything edible)

The bathroom was a comparative pleasure to clear as there were only old bottles of skin cream, shampoo, toothpaste and several yellowed toothbrushes. It was when we went into the back bedroom that the story further elucidated itself. On the walls, every section of sheetrock had been smashed through with back, shoulder and foot sized holes. This was possibly the work of an angry departing tenant or more colorfully, meth rage. It was almost methodical the way each hole was conveniently smack dab between every 2x4 in the wall frame. This was no doubt deliberate and likely spontaneous. On the floor, beneath one of the holes was a rung from one of the broken white ikea chairs. Scrawled on it in sharpie marker was what appeared to be an attempt at sketching. This 'artwork' revealed itself to be juvenile drawings of swastikas and SS logos as seen on German WW2 uniforms. It appeared the artist was trying to perfect his technique as there were many attempts to 'get it right'. Why this person chose a diminutive discarded chair rung to develop his art skills was beyond any of our guesses. Not only was this dude hopped up and angry, but also an artistically challenged anti-semite. Across the room, Chris warned us that this particular room pile contained a bunch of discarded needles and that we were to exercise extreme caution. The small needles were mixed amongst a bunch of used diabetic testing supplies and other almost-empty toiletries. The combo of diabetic supplies mixed with all the neo nazi rage essentially formed the the name of this apartment.

Throughout the day, we had brought various "donatable" items out to the front porch - which we had planned to pile into the pickup and take to Goodwill. As we brought down a basket of reasonably usable canned goods, a couple pulled up in a white 15 year old Volvo sedan. They approached us, asking if they could have the basket we had laid out as well as some other stuff. We enthusiastically replied that they could certainly help themselves. (This would save us the trouble of loading it on the truck) They didn't hesitate for a second. The wife commanded her thickly Hispanic accented husband to start loading up everything. The woman told us, with a never ending cigarette dangling from her mouth, that they had just moved here from Connecticut and "needed stuff". This did our hearts some well-needed good. I immediately ran up to the other apartments gathering anything that appeared salvageable - CD's, VHS tapes, clothing, computers, microwave ovens and rusty bikes - which joined their orphaned friends on the porch. As quickly as I brought down more stuff, it was scanned briefly and loaded them into the car. The husband was grumbling and quietly protesting the necessity of some of it while his wife barked to him that Aunt Maisie would certainly be able to use these things if they couldn't. The man continued trudging back and forth, making as many as 10 trips, until they had filled their car to the point that the back end was sagging a good foot lower than the front. With the realization they couldn't fit another thing, they happily thanked us and bid us adieu (In english of course) as if Christmas had come early this year.

Back in the meth den, after clearing out every room, we had only the bedroom closet to clear. We could finally see the light at the end of the tunnel. Inside the closet was a broken telescope, yet another TV, a couple dirty sweaters and jackets (surprisingly no Nazi symbols), and a perfectly immaculate brand-new stuffed white bear with a big-hearted valentine greeting "I love your hugs". I guess even raging methed-out diabetic anti-semites can find love too.
Posted by @DJNoRequest at 11:50 AM