I got the opportunity to do some work for a friend this past Monday. It involved being part of a team to help clean up abandoned apartments in a building he owns in Livermore Falls, Maine. The job was described to me as "cleaning with a shovel". Interestingly enough, Doug, who usually has folks in their 20's work with him, was quick to discover that the four of us collectively were 201 years old. We were all excited to see what we were made of and I, always being game for a new experience, was happy to join this 4 man crew. We were, however, not prepared for the impact each of these apartments had on us emotionally. If not for our collective sense of humor, we would have been overwhelmed at the evidence of the crushed hopes and dreams of these former tenants. Each apartment's debris and detritus told a very different story based on the items left behind.  I'll try to encapsulate observations of the people's lifestyles apartment by apartment. There were a total of 4 apartments that needed cleaning as the other units were left in comparably immaculate condition. The "comparably" term will be self-explanatory by the end.

We all decided it would be a good idea to tackle the most disgusting apartment first and work our way down to the least to maximize our energy output. Also, we just wanted to get the rough stuff over with. Apartment 7 edged out Apartment 5 by only a small margin.

Upon entering the apartment, I noticed that above the doorway trim was what appeared to be smoke damage. Looking inside, we realized it was in fact smoke damage - or rather "smoker damage". The entire squalidly furnished apartment had the dull yellow glaze of a shut-in chain smoker. Every window, wall and item, both vertical and horizontal, had an incredibly opaque coating of tobacco tar. The windows were so thickly coated that, like shower doors, obscured everything visible outside. The smell of stale cigarettes was so strong, it seemed as if he never even opened the windows once.
Apparently the previous tenant had only left the premises 6 weeks earlier, with a single Rite-Aid bag full of "important stuff", and left behind everything else he owned. His computer, stereo(s) VCR, DVD player and TV all remained exactly where he had left them. His VHS tape collection and stack of banal 90's dance CD's were stacked right next to the stereo as if he had just stepped out to go to the store.
The couch, worn well below the foam cusions to the springs, was that classic broken-down brown tweed that you might have seen in your friends' basement in the 70's. Joining the couch in the living room was a stacked twin size pair of mattresses that looked like they had been crushed by a sleeping elephant. These too were worn down to the springs through overuse. Ashtrays, cigarette butts, mail and other items were scattered about - including a notice that the state of Maine was providing him with his next apartment for free. (of which he had refused) The living room closet was stacked high, full of old photo albums (mostly empty), framed baby photos and owners manuals from items long gone. Hanging in the closet was his military issue jacket, a couple unused coats with labels still attached and random pairs of socks attached to hangers. (The sock theme seemed to be one of the many threads we noticed throughout the building)

Moving into the kitchen (off to the left the bathroom) we noticed the stove, counters and cabinets had not been cleaned in years. In addition to the yellow smoke film, were plates and utensils stuck to every surface as if they had been intentionally glued there. Pots and pans covered in an unidentifiable brown substance were scattered about and stuck to the sink and inside the cabinets where dirty glasses joined their glued comrades.

The bathroom - something I had never ever seen quite like, rivaled any abandoned building or crack den you can think of. The photos here attempt to capture the scene but really only capture a portion. Apparently he'd been living there for months without running water - which would explain the hideous pile shown below... (pic courtesy of Chris Johnson, one of my coworkers) 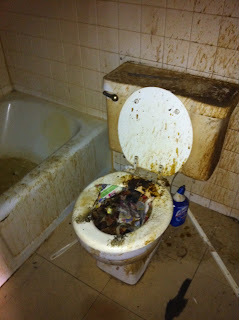 I've never seen a shitstorm like this in my entire life. This man was obviously obese judging from the size of the shorts and other discarded clothes, however the acrobatics required to reach the height of the spray is hard to imagine - even for a relatively healthy individual. The shot I took below, despite lack of lighting, shows this from a wider perspective: 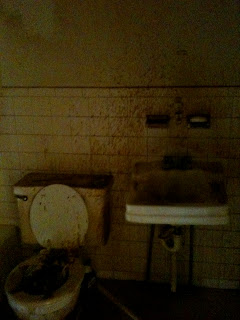 In the back, in what would likely have been a bedroom, were 10-15 contractor bags worth of discarded clothes. Dirty socks were strewn all over with a visible pack of new socks only partially used. In the drawers of an old faux antique dilapidated chest, were additional undergarments and random clothing items along with a few unused cleaning supplies and nail clippers (another thread). There was also a well-worn crumpled list of "Things to do" that looked as if it had been referred to many many times. On the list, #1 was "See psychiatrist about diagnosing mental condition" followed by what appeared to be 20 or so random tasks - one of which, on its own line, said "warm hole" possibly meaning worm hole. (I hoped) In the closet were several more pairs of socks affixed to hangers as well as giant tent-like shirts that could easily fit two of me inside. All in all, this unit was a sickly mirror of obvious mental illness and squalor and told a sad tale of someone who had essentially given up.

I would have run screaming from that bathroom and never returned. I will probably have nightmares.

Wow...I was getting hungry for dinner, but now my craving for pizza has been completely shattered! I cant wait to read about the other apartments! Keep up the good work.

Looking forward to continuing the journey through the building.